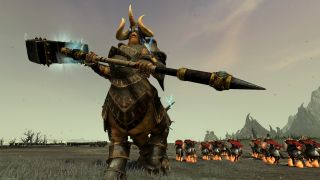 Great moments in PC gaming are bite-sized celebrations of some of our favorite gaming memories.

One way to win Total War: Warhammer 2 is by completing the vortex campaign, racing to control a magical whirlwind that looks like a glowing suspended toilet flush the size of Godzilla. Even after beating the vortex campaign the first time and learning how to game the systems, it’s still fun to roleplay as one of the factions who want control of the magical flush for their own ends.

But if you also have the first Total War: Warhammer you can combine the two games in the Mortal Empires campaign, in which victory is much more prosaic. On a much larger map you have to unite your faction, eliminate their main opponent, and then take control of a set number of far-flung locations with names like Black Crag, Hell Pit, and The Great Galleon. You can collect some of these diplomatically, through military alliances and vassals, but you’ll also have to expand your borders and swallow others up the old-fashioned way. You’re going to have to pull together some doomstacks of 20 units and march there.

One of the ways Warhammer 2 makes this more old-fashioned Total War campaign enjoyable is by tweaking the specifics for each faction. The Empire, for instance, has three sets of currencies to manage. Each of their provinces has a fealty score, and as they max out at 10 they offer to confederate. Meanwhile you’ve got an Imperial Authority score that can boost their fealty, but which takes a hit after each confederation—Wissenland joins the Empire and then every remaining independent province takes out the beefs they had with Wissenland on you. Complicating things even more, you’ve got prestige points that can be spent to manipulate how each province feels about you or each other, pushing them toward alliance or war as it suits you.

That adds mechanical depth to your attempt to unite all these squabbling humans, but the other reason to play The Empire is that they’re one of the factions who get access to the legendary dwarf hero Gotrek, who is voiced by Brian Blessed. So that’s fun too.

Mortal Empires is a big commitment which can potentially take hundreds of turns (recent patches as well as mods like the Turn-Time Destroyer and Faster End Turn Camera speed things up). When you eventually take your final turn and then watch the stop-motion replay of your rise to power it’s satisfying, but the real joy of it is just wallowing in the Warhammer world for a good long time, a soaking bath with armies and heroes to swoosh around instead of a toy duck.

Jody is that guy who will try to convince you to play some indie game you’ve never heard of with a name like Extreme Meatpunks Forever. He is also on a doomed quest to play every Warhammer game.