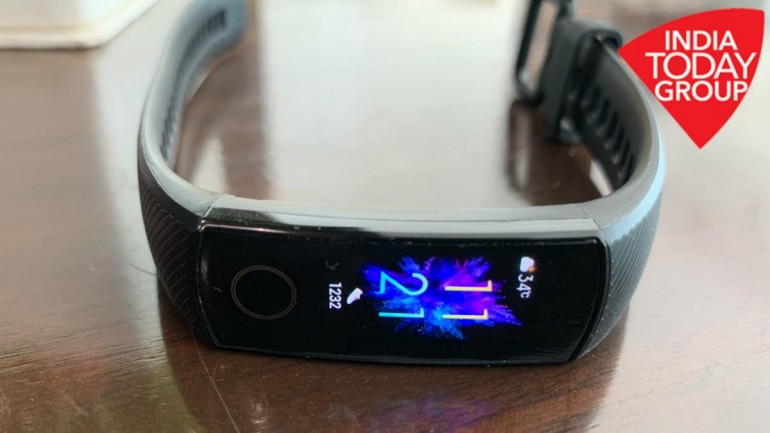 As affordable fitness bands go, the Honor Band 5 is definitely one of the better ones out there in the market right now. At Rs 2,599, the Honor Band 5 offers a vibrant AMOLED display, some attractive watch faces and just about enough fitness tracking features to motivate you into leading a healthy lifestyle.

The Honor Band 5 hasn’t changed much from its predecessor when it comes to the design. It sports a similar 0.95-inch AMOLED full colour display as the Honor Band 4. The entire face of the fitness band gets a 2.5D glass protection on top. The rest of the body is plastic, which is lightweight and makes it easy to wear it all day and to bed.

On most days, you’re likely to forget you’re even wearing the fitness tracker. It is small and comfortable enough to wear it while you’re sleeping as well, which is good because the Honor Band 5 also comes with sleep tracking. The Honor Band 5 has a very narrow design, which may look really small on big wrists. The rubber straps offer striped patterns on the surface and plenty of holes to make sure the fitness tracker fits to your wrist. The straps itself feel like cheap plastic rather than rubber, giving a rather flimsy look.

You can buy the Honor Band 5 in three strap colours – Coral Pink, Meteorite Black and Midnight Navy. The unit I received was in black, which is a discreet colour to go offer if you don’t want to draw a lot of attention.

The Honor Band 5’s main attraction is its coloured AMOLED full colour display, which is quite unique to find in this segment, at least for now. The Mi Band 3 and Galaxy Fit e both offer monochrome displays, which makes the Honor Band 5 look even better. That being said, Xiaomi will soon launch the Mi Band 4 in India which brings a coloured AMOLED display as well, so it will be interesting to compare the two fitness bands then.

The coloured AMOLED display on the Honor Band 5 looks fantastic with vivid and attractive colours on the tiny 0.95-inch screen. It makes the display look lively and appealing. Honor has also given some colourful watchfaces that come preloaded. In addition to the watchfaces, icons for Messages, Settings, Workout and Heart rate in the menu carousel are also coloured. The Honor Band 5 in India only offer 8 preloaded watch faces and nothing more. Honor has a new watch face store, but it is unfortunately not available in India just yet.

The display offers good brightness indoors, but you will struggle reading it under direct sunlight. Texts look sharp pretty much throughout the UI, except for notifications which appears in a small and contracted font, which can be a little hard to read. This is a small display, so you won’t be able to read messages in their entirety.

Honor Band 5 Fitness Tracking Performance and How to Pair

Pairing the Honor Band 5 is fairly easy if you own an Android or iOS device. You will need to download the Huawei Health app from the respective app store before anything else. On opening the app, you can choose the Honor Band 5 in the list of supported devices. This will then search for the fitness tracker, after which you can begin the pairing process.

The Honor Band 5 comes with 9 workout modes that includes outdoor run, indoor cycle, rower and pool swim. The last exercise mode also means the Honor Band 5 is water resistant up to 50 meters. It isn’t an exhaustive list of workouts, but it covers the essentials. I tried out the indoor run and swimming modes on most days and found them to be pretty accurate, give or take a few errors. In the Swim mode, you can set some targets like the number of laps you want to complete or duration of the swim or the number of calories you want to burn. Similarly, in the Indoor Running mode, you can set a target distance, duration or calories. Each mode will track your heart rate, calories burnt and distance covered in real time. The 9 workout modes should be enough to meet your basic exercising goals.

With Huawei TruSleep enabled, the fitness band will monitor your sleep quality and breathing patterns. In will analyse your sleep pattern and can diagnose 6 types of sleeping problems as well as provide personalised suggestions. You will get a comprehensive overview of your sleep pattern in the Health app. It will provide stats regarding your sleep, which is dividing into deep, light, REM, awake and naps. It’s hard to tell whether these divisions are accurate, but the band is pretty accurate when it comes to tracking when you sleep and when you wake up.

The Honor Band 5 has a solid week-long battery life with both sleep tracking and continuous heart rate monitoring enabled. You won’t have to worry about charging the device too often. In fact, you will often forget about checking the battery life on the Honor Band 5 over the course of a week as it is quite reliable and consistent. If you disable the real-time tracking features, the Honor Band 5 can last up to 14 days, according to Honor, which is impressive for a fitness tracker that offers a coloured AMOLED display. You get a tiny charger in the box on which you’ll need to clamp the Band 5. Charging the fitness band from zero to 100 percent takes about an hour.

Should you buy the Honor Band 5?

The Honor Band 5 is a great option if you’re looking for an affordable fitness tracker. The biggest reason to buy this over say a Mi Band 3 or Galaxy Fit e would be the full colour AMOLED display, which it’s biggest appeal. It’s a fitness band that you would like to look at every time you want to see the time or keep track of your activity level.

The band offers a decent number of popular workouts that should keep you satisfied. It comes with some attractive watch faces, but it misses out on the watch face store in India. That being said, you may want to wait until Xioami brings its Mi Band 4 to India later this month as it also features a coloured AMOLED display and is expected to launch at a similar affordable price point.