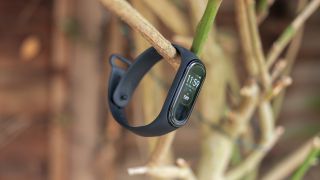 The Xiaomi Mi Band 4, above, will soon have more competition as Realme enters the market (Image credit: TechRadar)

The cheap fitness band market is set to be a highly competitive space in 2020 as Xiaomi and others push their affordable devices, and now another brand is set to join the fray.

Chinese phone manufacturer Realme has previously confirmed that it’s working on a fitness tracker, and we now know that it’s set to arrive in February.

We don’t yet have an exact release date for the Realme fitness band, but the company’s India CEO Madhav Shethat has confirmed that it will be launching some time in February.

Shethat has previously teased the device by wearing it on stage at a Realme event, although the company has yet to reveal the specs or price of the device.

We know from that glimpse that the tracker will be available in a yellow color, but it’s currently unclear if other shades will also be available. It also looks to have a silicone band, which may be the only strap option available for the fitness tracker.

A press render shared recently on Chinese social networking site Weibo has given us our best look yet at the Realme fitness tracker, again showing it in yellow, but it sounds like we shouldn’t have long to wait until we get an official look at the device.

Realme may use Mobile World Congress at the end of February to announce its new fitness tracker. The company also has a variety of other products in the pipeline, including headphones and power banks, so we may hear about them in February too.